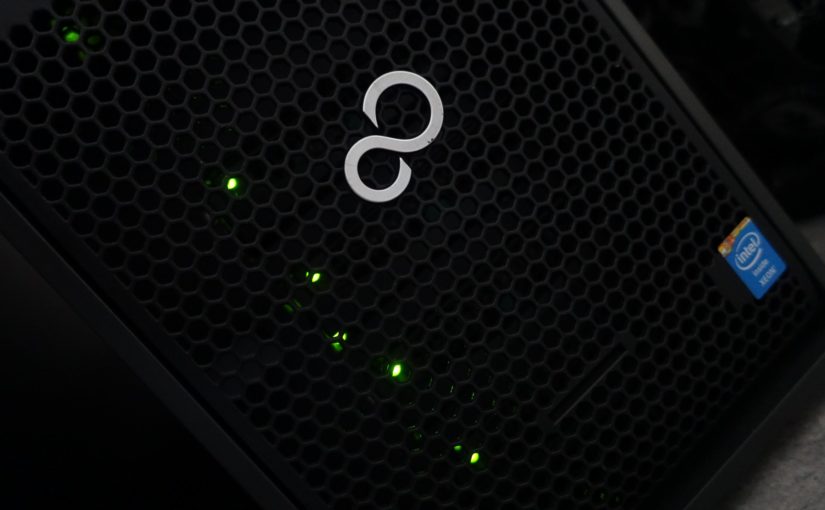 Or, “how I set out to spend 15EURs and wound up spending 10x that”. That’s excluding the extra parts/upgrades.

I’ve wanted a NAS for a long time. I have about 15 years worth of photos and curated music, which I would hate to lose, and would also like to share between my Linux laptop and Windows gaming desktop (that, as life will have it, I rarely have time to game on).

What doesn’t work: using a virtual machine on my desktop as a NAS. When Windows wants to reboot, the virtual machine has go down with it. And when it comes up, you have to manually start VMWare. I ran this for a year or two until one day the FreeBSD VM didn’t boot, so I was stuck without my files even though I had a computer that was still running perfectly, how silly is that.

I could use my gaming desktop as a file server, since Windows 10 has ReFS. This works well but still it has to reboot and thus not always available. It’s just not something you can leave alone for months at a time.

No, it has to be a separate machine, one that sips power and is quiet/invisible. Ideally it should be nice and small too, so I can run out of my house with it without having to leave everything else.

One day, my tango teacher mentioned that she wanted to get a more powerful laptop to edit video with.

I said “hey, I’ve got a totally tricked out Phenom II X6 1055T here with 12GB of RAM just waiting to be pushed to its limits” (this was my baby for 10 years, I’d rather just give it to someone I know rather than chuck it on eBay)
She said “great, my dad’s got a computer case and power supply”

So she brought it over, and her dad’s computer came with a Core 2 Quad Q8400, an Asus P5G41T-M-LX, and 4GB DDR3 RAM. Luckily my Phenom II was still 20% faster than the Q8400 according to Anandtech Bench. I installed the Phenom II, put in a Samsung 850EVO and 970 EVO Plus with an NVMe-PCIe adapter, and that was her new video editing computer.

This was my chance. A free C2Q Q8400 to make a NAS! I decided to install NixOS, but wait a minute – why does the installer fail intermittently? Uhoh, do I have bad RAM?

I looked at the RAM. It was some no name single rank crap. It was so bad, the first 2GB stick showed an error straight away, and the second stick even froze memtest86, that’s how bad it was. 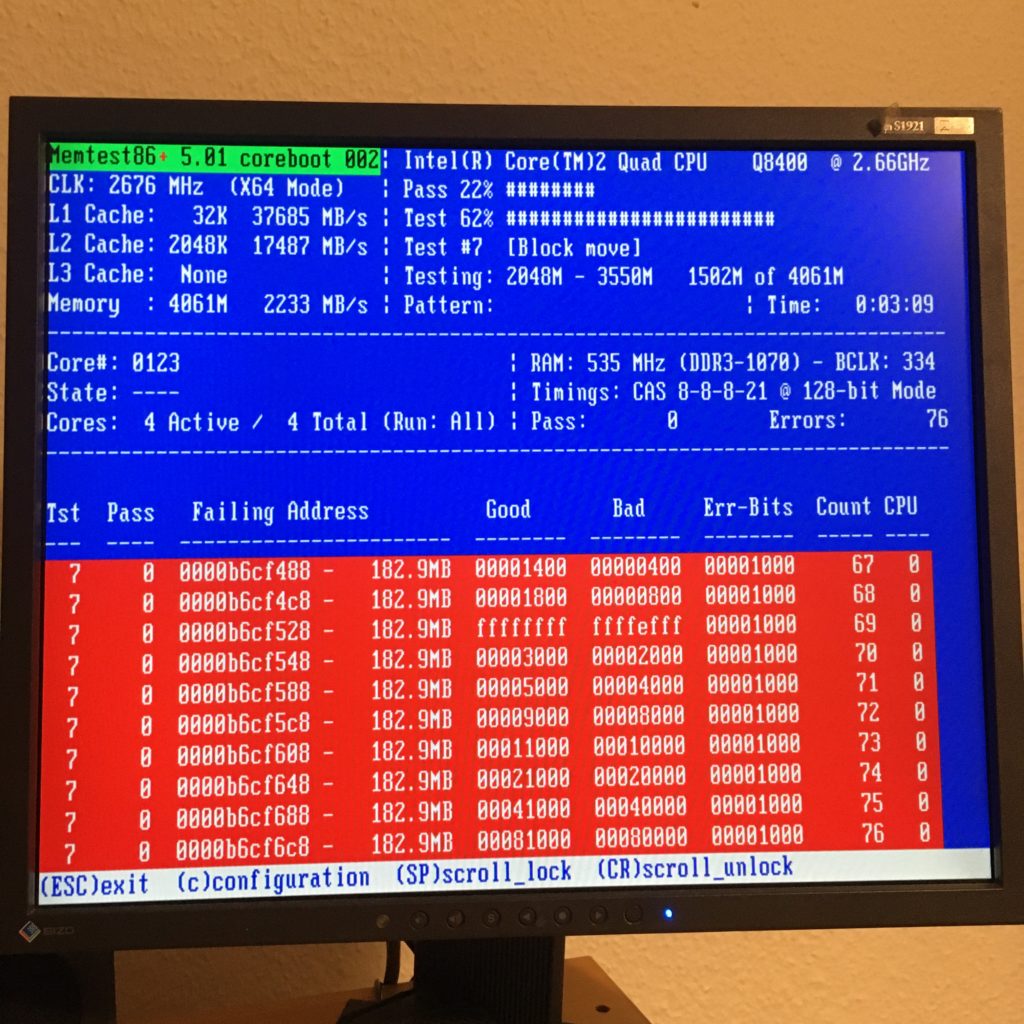 To think I was going to entrust my data to this! I gave these useless sticks to my other tango teacher, who taped them to the sides of his motorcycle. 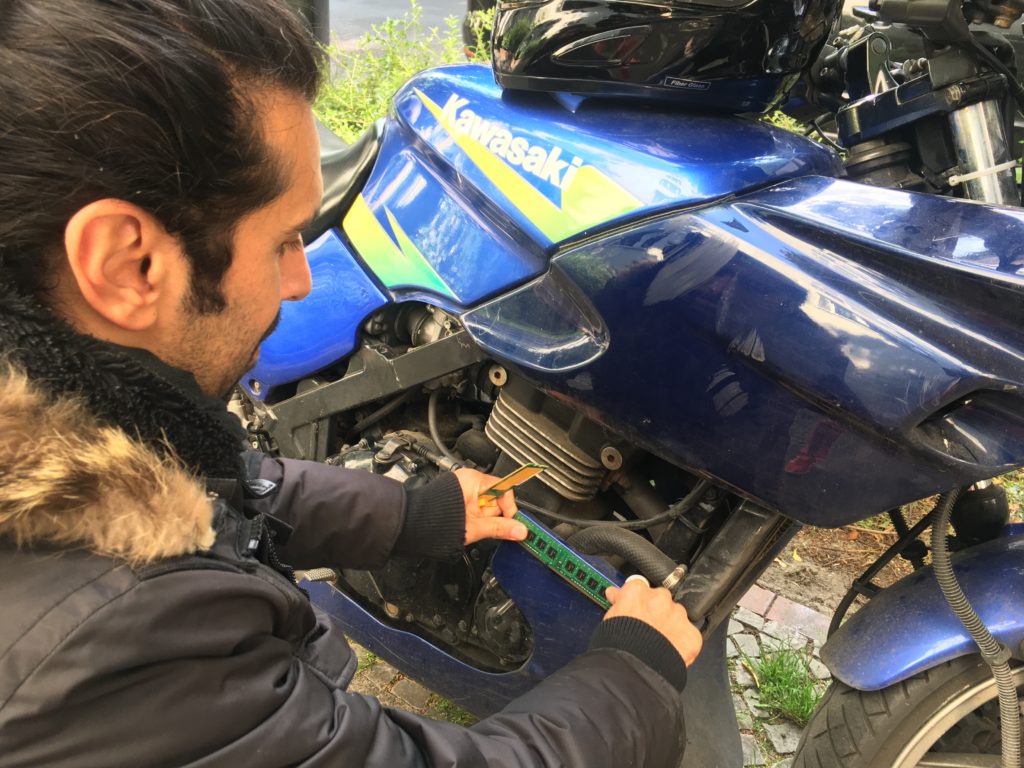 So my eBay journey looked like this:
7.5EUR for 4GB of RAM… hmm maybe 8GB would be nice. My god RAM is cheap these days. 8GB RAM is nothing if I want fast I/O – why couldn’t the motherboad come with more RAM slots? Hold up – I can get a Core i3+motherboard+RAM for 50? That’s a good deal! What about ECC RAM, can I get a AMD CPU?

I briefly entertained the idea of building around a brand new Asrock Rack X470DU, since AMD needs my support to keep up the good fight against evil Intel. I dropped that idea when basic math told me I’d be out 600EUR.

Back to the Core i3, motherboard and RAM bundle. Browsing through an eBay seller’s listings, I found… a Fujitsu Primergy TX140 S2, Xeon v3, 16GB of ECC DDR3 RAM, USB3 ports for 160EUR? And hold up – a Xeon v3 is actually a Haswell!?

Within hours, I became an expert on Fujitsu’s tower server lineup, from the TX100 S3p to the TX150 S7 and the TX140 S1/S2. It is actually quite difficult to find independent reviews of Fujitsu hardware.

… is a perfectly respectable 4-core Haswell that supports up to 32GB of unregistered ECC DDR3, 2 Intel NICs, only 36-40W idle power consumption, and just so happens to be a steal on eBay Deutschland.

For comparison, the HP Microserver N36L/N40L goes for the same price and has a much weaker Athlon II X2 CPU, supports only up to 16GB ECC RAM, has only 1 Ethernet port, only USB 2.0, and 1 low profile PCIe 2.0 expansion slot, which will hurt my dreams of sticking a Mellanox ConnectX-2 in there. Though it is much smaller.

Storage variants: 8x 2.5″ or 4x 3.5″ SAS hard drive cage. Buying these separately will cost you more than the original system so make sure you get the variant you need.

Comes with a Fujitsu D2607-A21 SAS HBA, which is a rebranded LSI 2008. I still have to reflash this to IT mode, because nobody should have to work with MegaCli, not when ZFS/btrfs exist.

Unfortunately you need to pay for the iRMC S4 license key that unlocks the HTML5 remote KVM (what a cool feature). That comes standard on Supermicro boards.

The BMC can be set to use the Intel NIC instead of its dedicated Ethernet port, so you don’t have to run a second Ethernet cable to the server for a feature that you will rarely use. I really appreciate little “courtesy” flourishes like these because you never find them on cheaper consumer products.

According to reddit’s unofficial Fujitsu Server Guide, the TX150 S7 is ‘silent’. According to Fujitsu’s marketing blurb the TX140 S2 has “extremely low operating noise”.

These statements should be taken “in comparison to a 1U rack server”, because the 120mm 38mm thick Delta PWM fan is not annoying but definitely audible from a distance, in a windy sort of way. It spins at 2000rpm all the time but it doesn’t have to, really, because the components are very cool. Unfortunately even after updating the BIOS, I couldn’t find any fan controls. 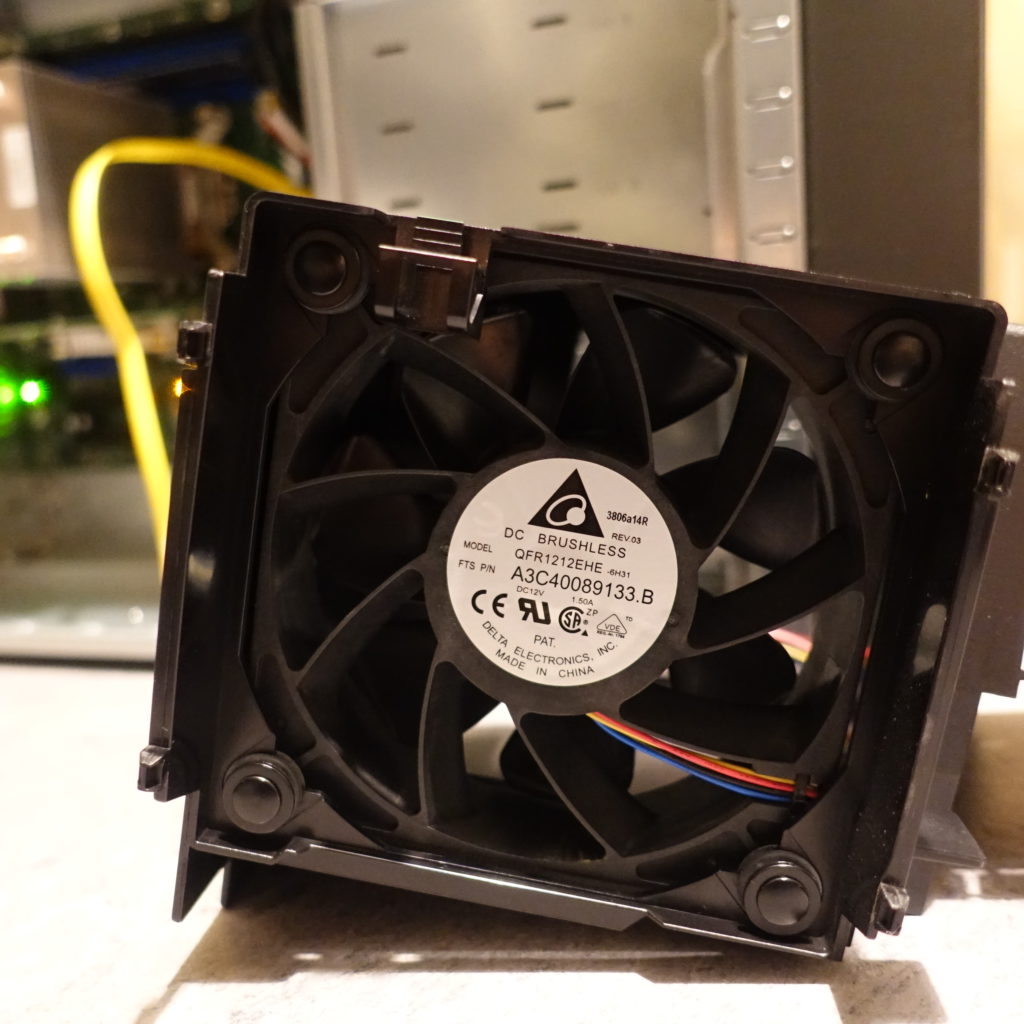 Normal PC fans are 25mm thick, but the Primergy’s Delta fan with 4 pin PWM is 38mm thick. Apparently (also here), thicker fans can push more air and achieve higher static pressure at the same RPM. I just wish it wouldn’t spin so much when it doesn’t have to.

I replaced it with a Noctua NF-A12x25 PWM, which made a HUGE difference. It’s only 25mm but just one NF-P12x25 managed to pull all the hot air away from my Ryzen 5 and through my AIO watercooled GTX1070’s radiator, so it’s more than up to the task. The cable is not quite long enough on its own – you need the extender or low noise adapter.

Remember the Powermac G5? It could dry a pair of socks in an hour or so. Even when idle, the air was warm. The Fujitsu never put out any heat, but the Delta’s airflow was considerable, and dried several pairs of underwear and socks just as quickly.

The firmware thinks the fan will fail soon because the Noctua doesn’t run at 2000rpm as expected (does this mean the Delta goes up to 4000rpm too?), and you can’t disable the warnings. This makes the status panel show red, orange and green LEDs, which is pretty.

Now that the Delta fan is gone, the hot pluggable PSU fan started to annoy me. It spins at 2600rpm, can go up to 4600rpm (where it sounds like a jet fighter) and changes pitch rather regularly. Of course you can’t control it either. So I did something totally scary – I took it apart to see if I could fit a Noctua NF-A4x20 PWM in there. 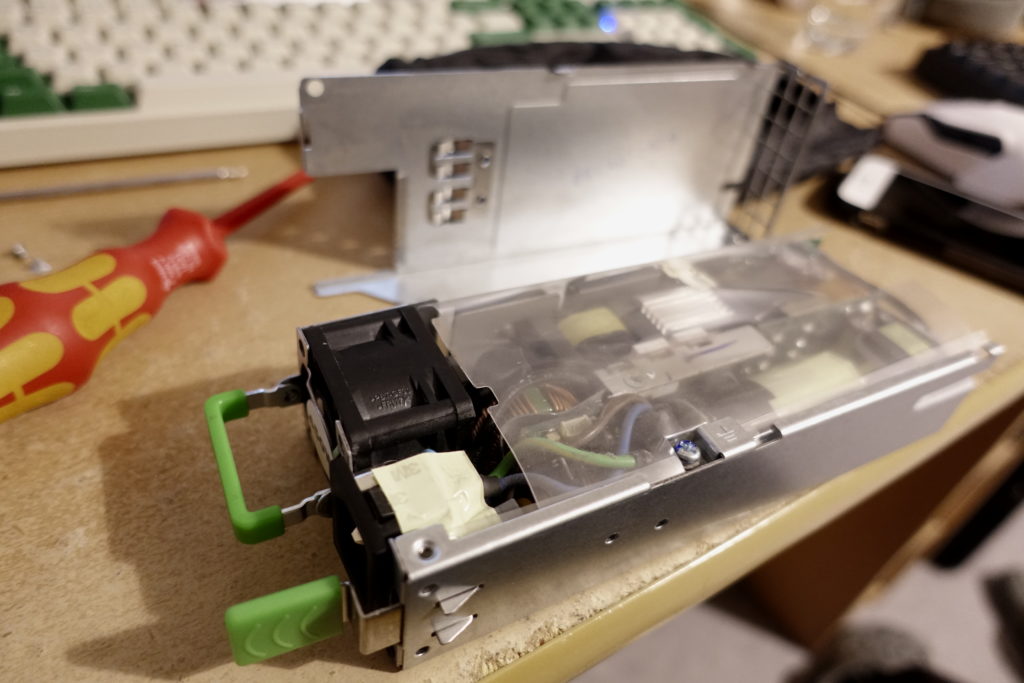 Getting the case off was easy enough.

After pulling the fan rubber mounts out, I realized I’d never be able to get them back in again without taking the whole thing apart. Oops.

Another Delta fan, 40mm x 25mm, so the Noctua NF-A4x20 wouldn’t work in here. I also compared the specifications, and the Delta FFB0412UHN pushes so much more air than the NF-A4x20, it might overheat if I replaced the fan. The fan cable was roughly 25cm long (the NF-A4’s cable is 20cm) and has a different connector, so I’d have to do extra work to adapt it and seal the 5mm gap. So it’s really not worth the trouble.

Those original rubber mounts were never going back in though. They frustrated me for a good hour until I remembered the Noctua NF-A12 also came with rubber mounts.

It was a real bitch getting it back together, and I have a great deal of respect for the Chinese workers who do this every day.

Surprisingly, simply putting the Noctua’s rubber mounts made the PSU almost silent enough! I can still hear it, but it isn’t annoying anymore, and I can only hear the fan changing its pitch if I listen for it.

In the end, I bought the normal 300W PSU in the hopes that I can make it truly silent. It looks like it uses a standard 80mm fan, which should be easy to replace or rubber mount – I don’t want the BMC to complain about another fan ‘failure’.

6W off (powering the BMC)

When I first got it, the key wouldn’t unlock the case. Turns out the bolt was jolted too far during shipping so the locking mechanism wouldn’t work. Use a flat screwdriver to push it back to where it should be.

This was my first foray into enterprise hardware, and it reminds me of my old RISC workstations, which were built just as well, but nowhere as practical since they were loud, too slow, and had outdated storage options. I really like how these are just normal PCs, but they have many little details that make working with them much nicer, which most consumers aren’t willing to pay for.

it’s about the details, the experience

my girlfriend on expensive restaurants

And this was such a deal! Let’s see if it still is after the upgrades:

Anyway, I certainly had a lot more fun than if I had just bought a fully prepared system for the same price. I enjoy building, tinkering, lusting after new hardware and a smaller microATX/ITX build would just restrict me.